Have you ever taken a road trip with toddlers? Well, I have and it was not pretty! Shawn from Awesomely Awake (one of my favorite new blogs) tells the story of traveling from Pennsylvania to Georgia with 2 1/2 year old twins. Yikes!

Shawn, you earned a merit badge! It is in the mail! 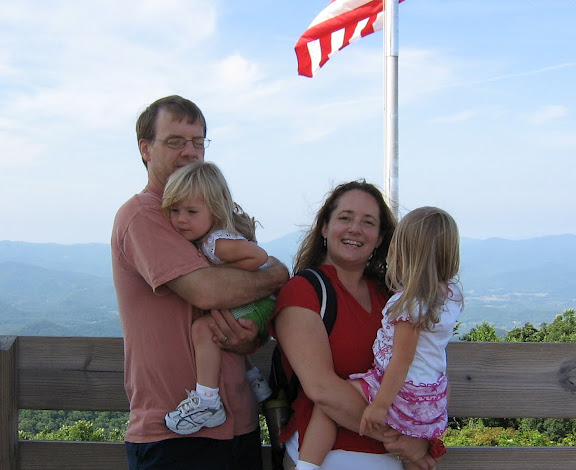 The Goal: Pennsylvania to the Northern Georgia mountains.

I remember the day clearly. Our SUV was literally filled to the ceiling with the whole house needed for a week's vacation with twin toddlers. It was an exciting time because it was our first major vacation and first time visiting my mom's new home. She moved to Georgia from Maryland the year our girls were born.

We had everything under the sun to keep them occupied. Goody bags to offer every hour. Toys. Games. Trays. Pillows. A million snacks, lollipops and treats.

And, DVD players that I had borrowed, just in case. We probably wouldn't need them!
We chose to drive during the day and spend the night half way.

{So, in other words, we had two torturous days of travel rather than just one.}

Still in diapers, the girls were surrounded by the worlds greatest things.

I think the fussing began around the 20 minute mark.

By the time we had reached Gettysburg, PA -- not even an hour from our house -- they were completely done.

"There, there. All will be well," I told myself.

We set up on the battlefield with a picnic blanket and some lunch. We changed diapers and let them run and play.

And then, back on the road, we popped in a brand new Elmo DVD and all else was calm as calm can be. I still hear those songs in my head from the many times it played.

Two days later -- after some of the longest hours of my life -- we arrived safe and sound in the beautiful Georgia mountains.

I sobbed as we pulled in the driveway, relieved for our road trip to be over.

And then, a week later, we turned ourselves around and did it all over again.

This summer, we're going to do it again for the first time since. But, our girls are older now. And I'm wiser. We'll leave earlier. We may even drive straight through.

It won't be easy but it never is. I mean, some days just getting to school is difficult enough.

We'll do our best. We always do.

Will we bring the DVD players?


Shawn Fink is a writer and blogger but is always a Mama first. She is the author of Awesomely Awake, a village that promotes living an intentional, creative and fun life -- with children.