My kids book club just read Esperanza Rising by Pam Munoz Ryan and once again I am so happy to augment my own reading with the awesome books I am introduced to through our homeschooling adventures.

Esperanza Rising is the story a young girl who lives a very privileged life on Los Ranchos des Rosas in Mexico, the vineyard her father owns, in Mexico.  She has servants, loving parents, and constant pampering. The night before her birthday, her father dies and circumstances quickly change. All the sudden Esperanza and her mother have to be smuggled out of their hometown and across the border into California where friends have helped her mother secure a field worker position. The late 20's and early 30's in America were a particularly tough time for Mexican-American citizens and immigrant workers for several reasons explored in the novel.

Through constant struggles and growing, Esperanza becomes like the mythical Phoenix bird, recreating herself from the ashes of her former life to find true happiness and worth. I do not think there was an adult in the book club who was able to finish the book dry eyed. Educational, emotional and heartwarming, this book is a must read (and maybe a must own for your own library).

Our group met, discussed the book, ate the fruit and vegetables that formed the titles for each chapter and made yarn dolls, a craft that shows up several times in the book.

As a family, we talked a lot about immigrants and migrant work forces. There is a large Mexican population in central Florida where I live. I worked with migrant students as an elementary teacher and college instructor. I explained to my kids that many of the struggles that Esperanza faced are current struggles. In particular, the Immokalee Tomato workers have protested and earned support in my community for their efforts to earn more money and improve conditions for field pickers. 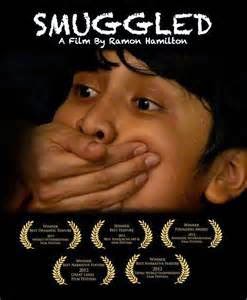 I am lucky enough to know filmmaker and producer, Jennifer Fischer of Think Ten Media Group and she sent me a copy of her latest, award winning feature film, Smuggled.  I wanted to watch it with my kids, and after reading Esperanza Rising, I knew the tie in would be perfect.

Smuggled follows the story of Miguel and his mother as they are hidden in a locked luggage section of a bus traveling from Mexico to America. They are excited to be reunited with the family patriarch (who is apparently working in America legally and waiting for them).

The film's relative slow pace and long scenes pull the viewer into the horror of being hidden for days without sun, fresh air, bathrooms, or even room to stretch. Without giving away the plot, things do not go as planned due to one simple accident and viewers are on edge until Miguel is eventually reunited with his father.

My kids were stunned and moved by this film. I was drawn in to the drama of this sparse and direct story line quickly.

I remember when I was in 3rd grade, my favorite teacher gathered all the 3rd grade classes and told the story of her family's harrowing escape from Cuba when she was a child. She shared the actual escape (hiding family treasures, using connections and important doctor appointments in the United States) as well as the trials of her father, a highly educated professional in Cuba and his ordeal as an immigrant. She left us with the message that even if everything is lost (or taken) the one thing no one can take is your mind (ideas, thoughts, dreams). It is there that you always free.

Sharing stories like this with children changes their lives and worldview. We learn that the world is not confined to our immediate environment. That things are fought for and complex and sometimes tragic.

Smuggled is available for rent or purchase on Amazon or through Think Ten Media's website. I think it is a challenging but thankfully not a gratuitously graphic film.  I highly suggest it not only to socially conscious families - but to teachers and schools as well. The discussions and reactions from a community of learners would be so rich and valuable. And so very worth it.
Posted by Amy at Monday, September 01, 2014 2 comments: