We are just layer upon layer of stories, fables, myths and poems to each other 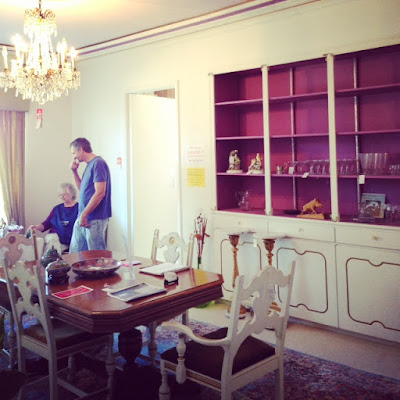 This weekend we stumbled upon an estate sale in gentrified Winter Park near Orlando. We love attending auctions, yard sales and estate sales but have taken a break as we declutter our house and move to smaller quarters. Saturday, I remembered what we have been missing.

The single story Roman villa we entered was worn but spectacular even in its denuded state. We saw: terrazzo floors, high, high ceilings painted with a Disney palette straight from the "It's a Small World" ride, a square iron tub, and an original push button stove from the late 50's, early 60's. Built in's, thick plush carpet and canopy beds hinted at the past elegance with which the previous owner imbued the property with.

As we wondered from room to room, we began to build the life story of the owner. He travelled. A lot. We later heard that he had been to over 150 countries. There were African marks, shell specimens, small, intricately carved and inlaid boxes, and many sweatshirts, robes, bottle openers and such emblazoned with the resorts and cruises he enjoyed. He had many mirrors that reached to the ceiling, small oil landscapes, iron sculptures of conquistadors and some ancient church thrones.

The library was a dream. Wall to floor wood bookshelves were filled with nature guides, books on art and psychology and an impressive collection of National Geographic Magazine going back to 1916. I became antsy as I scanned his stacks and wondered who he was and what his life was like.  Was he happy and content or chasing something elusive all over the world. There was no sign of a wife or children. Was he single, gay, or did his wife die years earlier and all traces of her were already wiped clean?

We found his makeshift office with an electric typewriter and filing cabinet tucked into a corner. His name was Arthur Blood. And he was a psychiatrist. I did a little research and found out that if he is still alive, he is 93 years old.

It was all interesting and made me think about the stories we invent about each other. And we do it all the time, don't we? I created a character while touring this house that was adventurous, mentally vibrant and connected to a community through his patients and the friends that he entertained. I felt better knowing this "type" of person existed in the world. And there were certain parts of his life I very much wanted to emulate.

But all of this could be completely false. He could have been a monster. A horrible traveller and small minded bigot.

Who knows? And in a way, who cares? Maybe we all exist as a roles in stories that others need us to fill in order to construct their own story. We are just layer upon layer of stories, fables, myths and poems to each other.

And when you realize that, and start listening closely to the text pour out all around you, life becomes complicated and more clear than ever. Try listening to the reading, writing and creating all around you. There are volumes of origami-ed pages strewn in your path.

And tell me. What would your end of life estate sale look like? How would people read the artifacts of your life? What story would you tell?