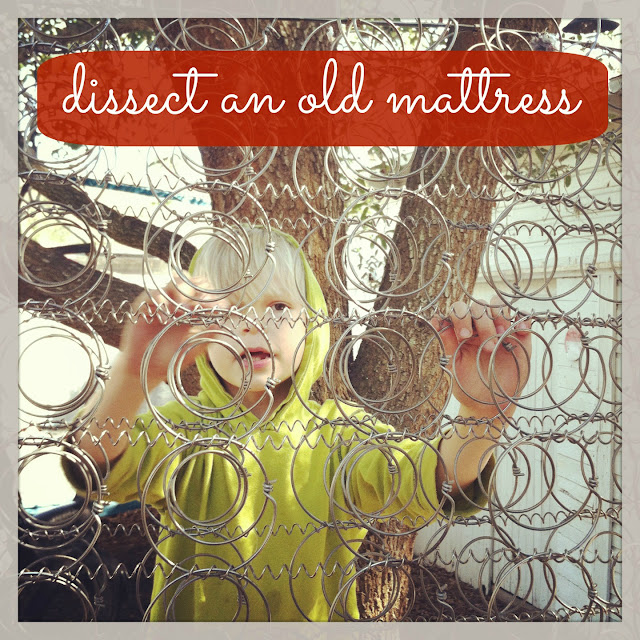 On my kids' list of experiences to have, dissecting a mattress was high up there. In particular, my son wanted to make spring loaded shoes and he knew he could get those from a mattress. But finding an old bed in the alley did not seem like a good idea to me.

Luckily, when my brother moved, he left us his mattress which was in good shape but headed for the dump. The kids first drug it in and out of the garage for a month and used it to alternately jump and lounge on. After spending one afternoon laying in the yard on a mattress, I can attest to the decadence of this proposition.

Finally, the day came they were ready to literally tear in to their project.

It was amazing (as all these kid led projects are).

They worked together, divided up the tasks, took turns and split the raw materials when they were done. My daughter constructed a little bean bag sofa for her club house, one son had plans for a knight costume and the other son, well, he just could not cut up the spring grid. He was fascinated by the construction and pattern and thought it would be a shame to destroy it. I agreed and we propped it up in the garden and might grown vines on it or use it as a nature display area.

Or in a few months, he might be bouncing down the street in his new spring loaded shoes.