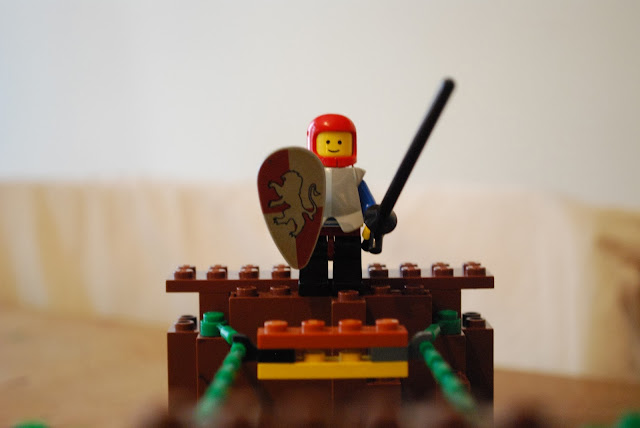 Lego, you got it all wrong.


I was up in arms, like the good feminist mom I am, when you released your Friends sets to girls.

They are too cute, way too easy to build, overly promote vapid, self-limiting girly activities like shopping, eating sweets, going to the hair salon and being a rock singer. Where is the challenge? The adventure? Where are the colors that inch away from the pink/purple/magenta end of the spectrum?

But my daughter, who plays Legos with her brothers, thought they were cool, so she got them and they were incorporated into the kids' play.

INCORPORATED is the key word.

At home they are incorporated, sort of like the real world. In the store they are 3 rows apart. Worlds apart really.

But here is the rub, that I did not even think about, boys are missing out too. My boys who have nearly every Lego set they have ever asked for are getting bored. They are tired of battling Star Wars or Hero Factory or Ninjago.

They want to build real communities. But to do that fully they have to head to the aisle that works so hard to exclude them with its doe eyed, dripping pink, victim/vixon plastic menagerie.

You might suggest the primary-colored City theme comes close - but it is a little public works oriented. I mean, not everyone wants to be a garbage truck driver or police man. In the real world, men can do helpful, even heroic things, and go to the cupcake shop. They get their hair styled and teach at a school.

This is not about gender bending (or Brony culture), this is about fully participating in life. Becoming a whole, multidimensional person and knowing how to feel comfortable in all aspects of human life.

Am I naive to think that if boys were allowed to fully engage in society the need for overly violent games would diminish. I don't think so. I am with kids 24 hours a day. I watch them. I have seen boys in school and in public being continuously fed a limiting role to play in our culture. They are shot down  (sometimes subtly, sometimes barbarically) if they begin to stray off the acceptable path of masculinity.

When you falsely separate the Lego worlds, you force kids to make a choice. A hard choice that has girls and boys, having to physically walk to another section of the store where they are sent signals that they are a foreigner and not supposed to be there. That takes a pretty empowered kid to cross that line. The interior dialogue might be: "Today, I am liking this better, but I might be weird, am I strong enough to make my own choice or should I just go back to my aisle where it is easier. I don't really belong here, do I? This is not meant for me."

Many adults I know struggle and have a hard time straying from the norm. How and why do expect kids to be able to do it?

And to be clear, these boys of mine love to battle and make things from duct tape. They fart and pick their noses and like to be gross. They are very stereotypical boys in many ways.  They are not the shy, delicate boys who just want to play with dolls (although, of course, I would have no problem with that either).

But times have changed, Lego. These boys play hard and then come in and help their Dad make dinner. They sew with their mom and watch her handle difficult people with ease and verbal skills. They help their dad with demolition projects and throw stuffed animal parties.

It is all there. Their world is so much richer than what you are offering them. Kids play is not just about creating fantasy worlds, but also as a place to work through the emotional detritus of their own lives. To practice playing parts and solving problems. So, what happens when we give them toys that splinter their world into disparate parts that have no chance of connecting with each other? Why such a complete and devastating fracture?

You have an opportunity to help boys + girls across the globe develop as whole beings.

And while you are certainly not the biggest piece of the problem, you are in a unique position to promote values of equality, exploration and wholeness.

What would happen if you stopped offering Legos in specifically boy and girl themes?

What if the packaging was not a gender indicator of the consumer?

What if you suggested that stores sell ALL the Legos on the same aisle?

What if you did not play to the lowest common denominator of mass consumer?

What if you became a leader and helped charter a world where boys and girls lives are integrated under the category of "kids"?

This extreme separation of toys, not only along gender line but also age lines too, is a direct result of unconscionable greed.

Sadly, I am sure you will stick to profit building as the guiding principle of your company. And reluctantly we will still support you by buying Legos as long as my kids want to build with them. But, be assured that my kids (and many others) subvert and use Legos in ways you will never see in your "test" groups. You are missing something so much bigger. Your simple, underestimation of children's culture will drive you into obsoletion much sooner as kids realize your limiting view of contemporary life. Of their lives.