book review :: The Sound of a Wild Snail Eating 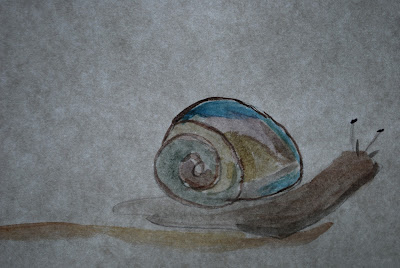 The memoir The Sound of a Wild Snail Eating should be read slowly and savored in little bits. As a young woman recovering from a chronic illness, Elisabeth Tova Bailey was gifted a little plant with a snail picked from the wild. At first, she grumbles at this perceived responsibility as she is so sick she can not even take care of herself. Slowly, she becomes fascinated by the snail and its habits and is able to find deep connections between her struggle to regain health and the impressive abilities of the snail to regenerate and sustain itself in an often harsh world.

What made this particularly sweet to me, was that each day my naturalist son would ask me what I had read the night before. Much of the information I would share he already knew, but there were many new facts we learned along the way.

The first night Bailey spends with the snail at her bedside, she is stunned by the remarkable sound of the snail eating. It sounds like a little man eating celery, she writes. When I told this to my son, he was fascinated. We have raised snails several times, but have always kept them enclosed in glass, so never heard them.

"That would be pretty amazing to hear, huh?" I remarked.

A few days later, my son came up to me and whispered loudly, "Mom! Come here!"

I followed him as he led me to our snail habitat where he had fed the snails and left the lid off.

"Listen," he said, lowering his head.

I lowered and tilted my head and heard it! I heard the snail eating!

Our eyes met and I nearly cried at the magical gift he had just given me.

We are often moved by big, natural phenomenon like huge crashing waves and lightening strikes that light up the whole sky, but in that moment I was just as mesmerized listening to the sublime activity of  this little snail munching on vegetables.